Hydro-Québec and its partners use cookies to offer a better experience on our website. By clicking “I consent,” you consent to the use of advertising cookies to provide content based on your interests. For more information, go to the Terms and confidentiality section.

In the greenhouses at La Vallée du Moulin, they grow figs, but soon they will also be testing a technology that could bring more locally grown fruits and vegetables to our table, regardless of the season... and fulfil our dream of greater food self-sufficiency in the near future.

“It’s a jungle in here!” says Serge Proulx, co-owner of La Vallée du Moulin, as he picks his way through the lush vegetation. He lifts a broad green leaf to reveal the fruit hiding beneath it: figs that are almost but not quite ripe. Despite the heat and humidity, we are not in some tropical forest, but one of the greenhouses at La Vallée du Moulin, in Melbourne, in the Estrie region.

The Proulx family is among the greenhouse producers leading a small revolution in Québec agriculture. In seeking to grow an exotic fruit like the fig in defiance of our harsh winters, La Vallée du Moulin is part of an even more important project: finding the recipe for increasing Québec’s food self-sufficiency.

It’s a dream in which we at Hydro-Québec are keen to play our part. “The pandemic has put food self-sufficiency in Québec in the spotlight,” says François Desautels, Account Representative at Hydro-Québec. “It’s clearly an issue the public feels strongly about.” Indeed, this was one of the main wishes that Quebecers expressed in the Collective Energy consultation.

To encourage this kind of agriculture, a new rate option has been available to greenhouse producers since December 2020. “We started looking at more ways we could help them. Our clean energy can help their business to thrive.” And what is brewing at La Vallée du Moulin could prove to be an essential ingredient in the recipe. 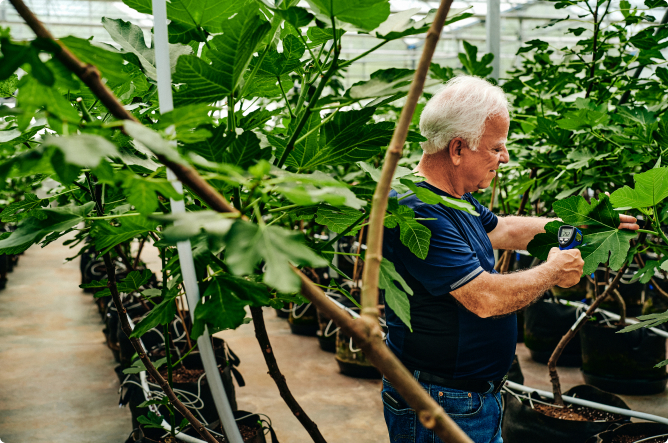 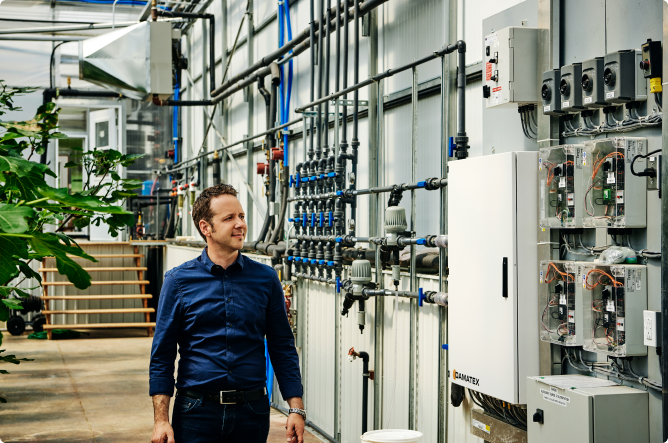 The advantage of growing crops in Québec: freshness

Before embarking on fig growing, Serge Proulx cherished a childhood dream of building a water mill. In 1998, he found the ideal spot: a 225 acre property with the Rivière au Saumon winding through it. Here, the retired engineer even built a micro hydropower station to generate part of his electricity.

Over time, the dream turned into a family project involving his four children: Anne-Marie, Étienne, Marie-Michèle and Mylène. First there was a tapped maple stand, then beehives, hens and an orchard, followed by greenhouses in which they grew strawberries, quince and yuzu. “We like experimenting!” says Anne-Marie. If all goes well, La Vallée du Moulin may open its doors to the public within a few years.

Their biggest experiment to date has been the fig trees, which have now been growing for five years. It’s a project about to bear fruit! This year, for the first time, La Vallée du Moulin will be able to sell its organic figs, along with fig spreads and fig paste. A total of 18 varieties are being grown, with approximately 2,000 trees. Among them are the Violette de Bordeaux variety and Serge’s favorite, the smaller, sweeter Hardy Chicago.

Tasting these delicious figs in Brittany, France, was Serge’s lightbulb moment. “Unlike bananas, which ripen during transport, figs are at their best immediately after picking,” he explains. “Imported figs take two or three days to get here by train from the United States or by plane from Europe.” That’s why they never taste as good when they arrive as when freshly picked!

5 to 7 yearsTime a fig tree takes to reach maturity

90 daysTime a fig takes to ripen after appearing

150 figsNumber of figs produced by a mature tree

The Vallée du Moulin greenhouses are not just smart, but ecological. Heated by biomass wood pellets—made of wood residue from Québec forests—they are fitted with radiant walls and floors. Solar energy plays a role, and even rainwater and snow are recovered!

In what Serge calls “the R&D greenhouse,” fig trees are set up on flood tables from which irrigation water and fertilizer can be recovered. “It prevents waste,” he points out. The remark earns him a teasing comment from Anne-Marie. “That’s an obsession of his! When we were young, he was forever saying, ‘Shut the door, we’re not heating the outdoors!’”

This same obsession is at the root of another experiment, and a very significant one: dehumidification. Serge explains that the greenhouses are generally overheated and that humidity produced by the plants is dissipated by simply opening the roofs. “That’s about 30% of the energy disappearing into the air”, he laments.

Looking for a better way, he turned to Enerprox, a Victoriaville business that this fall will equip his greenhouse with a climate-management system running on clean energy. “Our modules run on heat pumps that recover heat,” explains Christian Poudrier, president of Enerprox. “The system’s energy performance is optimized in real time by our intelligent algorithms.” 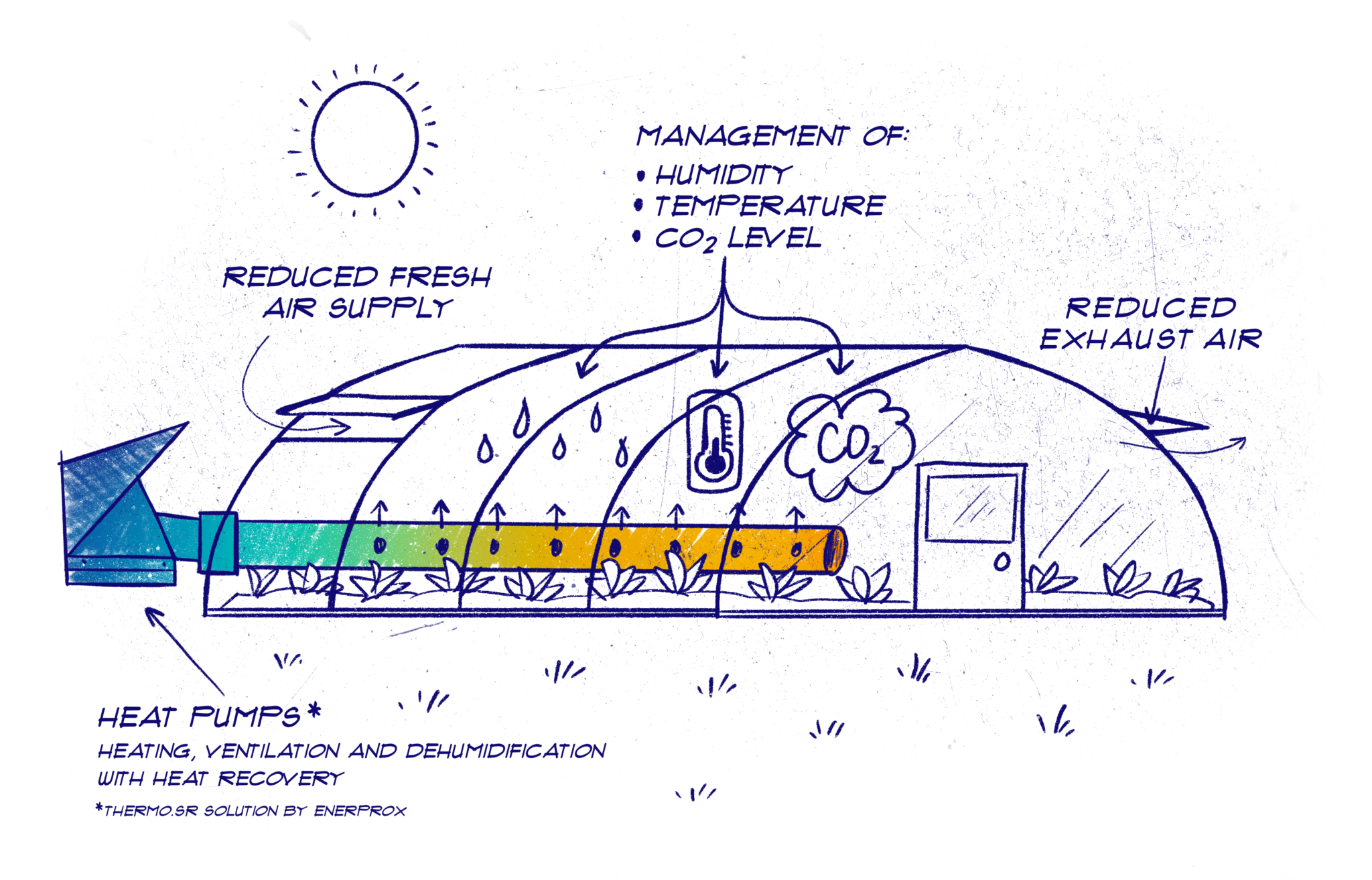 Responding to data gathered, this innovative system will create a uniform climate year-round, which will help optimize crop yields. “Since all our greenhouses are computerized, we’ll soon be in a position to compare the two approaches. If this technology proves to be as efficient as we expect, we’ll install it in our other greenhouses,” said Serge.

As soon as François Desautels of Hydro‑Québec heard about the pilot project at La Vallée du Moulin, he immediately understood the benefits of supporting the experiment.

That’s why Hydro-Québec has contributed to the project through its Efficient Solutions Program, which supports energy efficiency measures. A wonderful helping hand for innovation in greenhouse growing! It’s important to understand that humidity in greenhouses is particularly difficult to control. “It’s the key to the whole business! It varies constantly between day and night, or as the result of other factors, like a cloud that hides the sun,” he explains. Humidity is also essential for plants to be able to produce fruit.

At La Vallée du Moulin, the impact humidity in the greenhouse can have on production has already been observed. “Last year, some fig trees that were well irrigated and fertilized lost their fruit. They weren’t happy,” says Anne-Marie. When a greenhouse is too humid, plants are less productive. On the other hand, if humidity is insufficient, they will be stressed and use all their energy to protect themselves, to the point of abandoning their fruit. 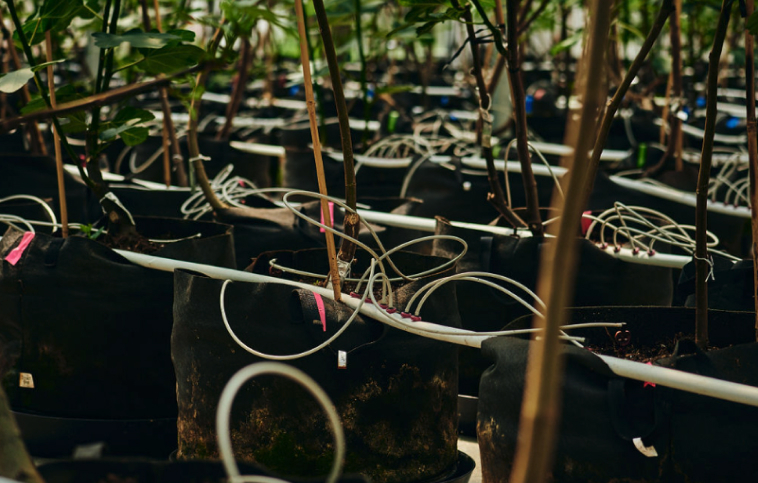 The technology used in the greenhouses.

Over the coming months, La Vallée du Moulin will use these technological tools to determine the optimum humidity rate for fig production. “There are still many unknown factors,” Serge admits. “But if we succeed in creating the ideal conditions for our plants, we will definitely be able to increase our crop.” Now that’s a mouthwatering prospect.

Researchers at Hydro-Québec’s Laboratoire des technologies de l’énergie have high hopes that the dehumidification system tested at La Vallée du Moulin will prove effective. They will be involved throughout the project, taking measurements and assessing how this innovation could be used for other greenhouse crops in Québec, such as tomatoes. In addition to conserving our precious energy, the technology could lead to increased production of yet more fruits and vegetables, here in Québec, year-round—not to mention a chance to enjoy them at the peak of their flavor!